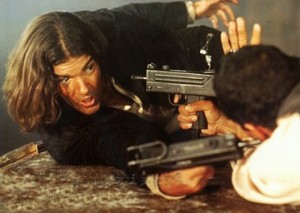 Robert Rodriguez directs Antonio Banderas in this brutal and humorous gunfight, which culminates in a John Woo-inspired standoff between El Mariachi and the last killer standing. Out of bullets, each desperately searches for a weapon containing ammunition, each one coming up empty, until Banderas breaks the man’s neck instead. One of my favorite action movies of the Nineties.