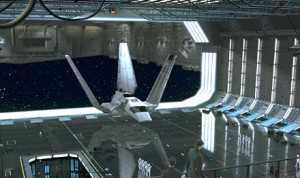 The Star Wars universe could provide twenty lists of cool vehicles, but one of my all-time favorites is the unassuming T-4a shuttle. It’s sleek, and has a great tri-wing design, the top one resembling a shark’s dorsal fin. As the ship lands, the side wings fold up, and in 1977, little Eric thought it was one of the coolest things ever.