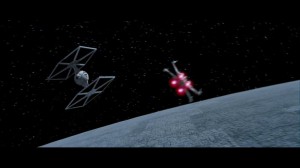 Few ships are more recognizable than the uniquely-featured TIE Fighter. Powered by twin ion engines (thus the TIE), this solo-piloted vehicle emits an otherworldly roar that sends chills down the spines of eleven-year-old boys. The twin hexagonal wings must serve another purpose other than looking funky, but I don’t really care. The entire ship is just cool. Vader’s version sports slicker wings, as does the interceptor version, but this is the look science fiction fans will always remember. Screaming through a galaxy far, far away.