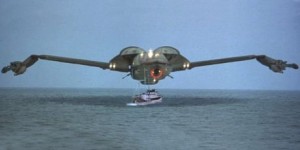 Sure, the Romulan Warbird is larger, and has a funky looped wing, but in terms of predatory design, nothing beats the Klingon Bird-of-Prey in the Star Trek universe. Specifically built to resemble its namesake, this ship is the perfect counterpart to its aggressive crew. Bonus points awarded for being able to travel through time and transport humpback whales. Also known to scare the crap out of whaling vessel crews.