Thanks to KsaRedFx, I just spent a few mind-boggling minutes on a Minecraft multiplayer server, doing some sightseeing. So far, the only multiplayer Minecraft action I’ve had is on my own LAN server with the girls. I wanted to try out PC Gamer Magazine’s multi server just to see what others have built, but they seem to have no end of trouble keeping one going. Reading posts there, I came across another server, and decided to give it a try. Seems like I came at an odd time. KsaRedFx was the only person in the Minecraft Republic besides me, and obviously he’s one of the wizards behind the curtain. He promptly teleported me to his location, and showed me his latest creation: 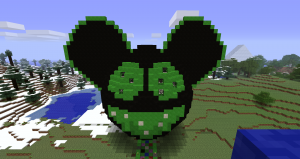 Looks like deadmau5 to me. Thanks, KsaRedFx, for trying to show me around, while I wandered about like a dork. I soon bailed out rather than do something stupid, but I’ll return. It’s odd that I visited when I did, because big changes are coming to the server. For more details, go to http://minecraftrepublic.blogspot.com/