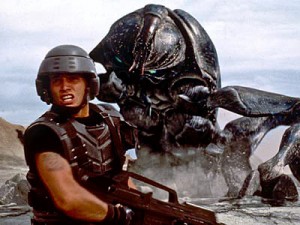 One warrior bug would be enough to have me running, yet the troopers take them on by the hundreds. Add in massive napalm-spewing tanker bugs, and even larger projectile-launching plasma bugs, and the odds seem ridiculously one-sided. My favorite fight in this movie is really a cheat. I’m combining bits and pieces from several battles: Plasma projectiles taking out orbiting ships above Klendathu, the Roughnecks first taking on a tanker bug on Tango Urilla, and the defense of the Mormon outpost on Planet P. Visually, this film still stands tall, nearly fourteen years later.