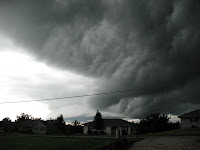 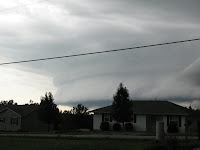 On the way home from work yesterday, one of the coolest storms I’ve seen was rolling toward our town. It looked like a gigantic jellyfish or alien spacecraft, and I pulled into the driveway as it was approaching at high speed. I grabbed Valerie and our camera, and stood outside taking video and pictures. It looked like something out of Independence Day, and we half expected a huge spacecraft to materialized out of the cloud bank. I’m not sure the pictures tell the story very well. It was an amazing experience. There were two identical cells. One passed right over us, with the other keeping pace in the distance. It also answered the question of whether or not we would survive an invasion. As most the people in the film, we just sat there gawking at it instead of running. BOOM, we’re toast!
Liked it? Take a second to support cavebabble on Patreon!