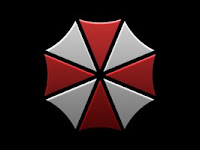 When your corporation is called Umbrella, and builds a scientific complex named The Hive underneath a city known as Raccoon, you must exist in films based on video games. But the Resident Evil under Raccoon City is more than just the Umbrella Corporation. The company develops and accidentally releases the deadly T-virus, but once they escape, the resultant mutant zombies do the real dirty work on the surface. It’s up to Milla Jovovich and a rotating team of human sacrifices to right Umbrella’s wrongs, and smack down the undead.
Liked it? Take a second to support cavebabble on Patreon!