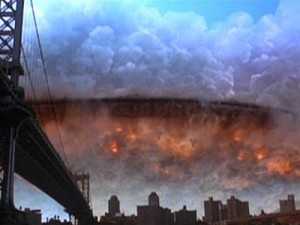 I don’t know the official name of these hulking saucers, but they certainly make an entrance. The invading aliens in Independence Day arrive in style, aboard thirty-six identical, fifteen-mile-wide craft, which are deployed from their mother ship. Despite being vulnerable to a jet up the pie hole (and what isn’t, really?), these destroyers are incredibly intimidating. Especially when arriving in a roiling, atmospheric cloud of flame and death. One of the better arrivals in sci-fi history. White House shield recommended.