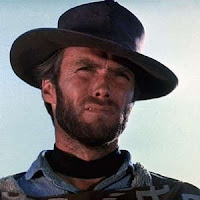 Battle: The Man with No Name guns down four Baxter family goons
Film: A Fistful of Dollars (1964)

“Get three coffins ready,” The Stranger advises Piripero the coffin maker. One confrontation and a second’s worth of gunfire later, The Stanger saunters back past Piripero. “My mistake. Four coffins.” Clint Eastwood settles into his defining role as The Man with No Name in this classic Sergio Leone western. There are plenty of gunfights to enjoy in this film, but the dry humor of this one hits me just right.