Cavebabble Episode 269 teams up with Hugh Jackman to demonstrate moves for Atom, the boxing robot. Join us for a look at the 2011 science fiction sports action movie Real Steel. This episode is brought to you by A Boy And His Bot. 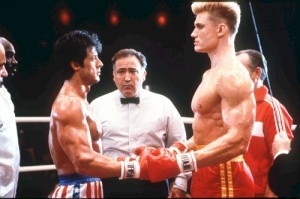 You can’t get much more 80’s than Rocky IV. From the music to the protagonists, it’s impossible to remove the film from its original decade. It does have one hell of a final fight, though. As usual, Rocky takes more punishment than humanly possible. But it’s Dolph Lundgren’s crop-topped Drago that  puts it over the top for me. Nearly impossible to not bob back and forth while watching this.