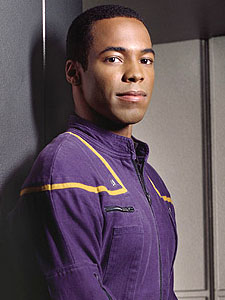 I’ve now watched twenty episodes of the first season of Enterprise, and I’m starting to wonder why they bother having Ensign Mayweather on the show. So far, they’ve barely featured the poor guy. At least they let him pilot the ship. Perhaps they have a nice Mayweather-centric episode later on in the series, but I’m not holding my breath. He’s so one-dimensional at this point that any sort of featuring would be an improvement.