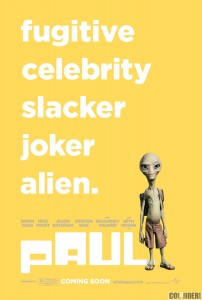 The stars of Shaun of the Dead and Hot Fuzz combine forces again as sci-fi geeks on a cross-country RV trip following their first visit to San Diego Comic-Con. While jaunting between well-known UFO conspiracy attractions, a close encounter with a mysterious black car ends with an actual alien tagging along with them. As these stories must go, the alien, Paul, must be taken to a certain location in order to return to the stars. A simple setup for a chuckle-worthy science fiction comedy. The number of sci-fi film references in this movie is great, whether hidden within dialog, the background, in the way shots are mimicked, or in the form of certain stars. No doubt when I watch this a second time, I’ll catch more. As a sci-fi film nut, it’s all good fun. At first it was tough to hear Rogen’s voice without thinking of Bob, the character he voiced in Monsters vs. Aliens, but soon the character works on its own, and the voice isn’t as obvious. Not the best science fiction or comedy film I’ve seen, but better than average. Extra points awarded for Nick Frost drinking out of a green alien head mug, similar to the one on my desk at work. Grade: B