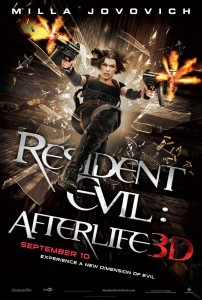 Who in the world is left to oppose Umbrella Corporation anymore? Other than multiple Alices, not many others. Arcadia, the supposed safe haven from the deadly T-virus, isn’t in Alaska as supposed, and soon Alice has Claire in tow, heading back to Southern California in Alice’s nifty airplane. Judging by the number of miles flown, this plane seems to require even less fuel than the helicopter from the last film. No matter. Soon, they’ve managed to land the plane on the top of a building (!), and taken refuge in a prison with the last known survivors in L.A. Now they must find a way to get to a ship just off the coast. The ship’s name? Arcadia. People spin, kick, and shoot things while other things go BOOM. In 3D. Unlike the vehicles, this series is just about out of gas. And I say that as someone with a high tolerance for bad science fiction horror and action movies. I did like the scale of the zombie horde outside the prison gates, and a particularly nasty guy with a massive bladed meat tenderizer, but on the whole this film is passable, not memorable. Finally, may we please get away from characters wearing sunglasses both inside and at night? Grade: C