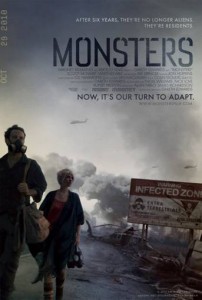 Just south of the U.S. border, a crash-landed NASA probe has resulted in alien creatures being introduced to our world. A large swath of Mexico is declared an Infected Zone, and military units from both sides of the border wage war on the creatures. A war and disaster photographer working in Mexico is tasked with escorting the daughter of his employer out of this infected area, and back to the United States.

I wanted to see this small film while it was at the theater, but it wasn’t shown near us. Much like the Rodriguez film El Mariachi, this movie is well known for its small budget and crew-  it cost about $500,000 to make, and had a crew which a majority of the time consisted of the director, a sound guy, and the two actors. Not the most impressive numbers when you consider this is a science fiction film, complete with one hundred and fifty foot tall alien creatures. The resulting film is part creature feature, part romance, part travelogue, part social commentary, and something I’m very glad I watched. The limited effects work is decent, but showcases the lack of budget- this won’t blow the socks off of effects hounds. I’m a huge science fiction fan, but at times I found the alien element wasn’t necessary, for the human element of the film is far more effective and realistic. The slow pace and lack of crisp plot focus may turn some off, but I found it all engaging nonetheless. Certainly worth a look. Grade: B