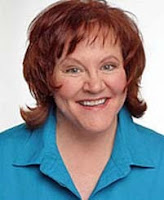 Age: 58
You Know Her From: Pee-wee Herman Show, Cheech and Chong movies, Ferris Bueller’s Day Off, Flubber, various animated movies and television shows
McClurg’s face and full-figure is as familiar as her voice, which has graced a mind-boggling array of projects, including The Little Mermaid and A Bug’s Life. Well worth a spot as an Unknown Actress.
Liked it? Take a second to support cavebabble on Patreon!