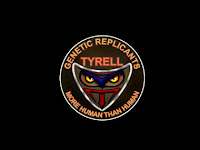 More Human Than Human is the motto of Bladerunner‘s Tyrell Corporation, designer and manufacturer of replicants. The corporation manufactures these artificial humans for use in dangerous or undesirable occupations, much like slaves. The head of the corporation, Dr. Eldon Tyrell, has his eyes gouged out by one of his creations, which seems a fitting end. Then again, Tyrell manages to make Sean Young seem human, which is quite a feat, and should be recognized.
Liked it? Take a second to support cavebabble on Patreon!